The name “laser” is an acronym for “Light Amplification by the Stimulated Emission of Radiation” and is a device that emits a beam of light through optical amplification. Who knew? 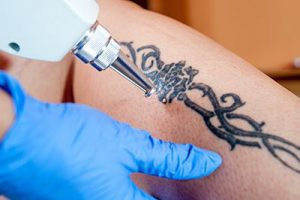 Einstein first theorized about this in 1917, but it was not until 1958 that Gordon Gould, who was a doctoral student at Columbia University, began to build one. Unfortunately, he forgot to file for a patent until 1959, and his technology was exploited by others. It took until 1977 for him to obtain the patent.

Today, lasers are used for all sorts of different purposes, not the least of which is skincare. At Silicon Valley Aesthetic Dermatology, we use them for laser skincare in Foster City.

One of the procedures that we provide is laser tattoo removal. It is a sad fact that many people rush out and get a tattoo, often after one glass too many of vino, which they later regret. Today, we can remove that tattoo using a laser and it is the most effective method of removing tattoo ink without leaving any scarring.

A Laser Can Also Be Used For Hair Removal

If you suffer from acne, which many people do, we can use laser treatment in Foster City to deal with the scars and hyperpigmentation that can be left behind when the acne heals. It can also be used for inflammatory acne.

Another problem that affects absolutely everyone is aging. As we get older those wrinkles start to form as the skin becomes more saggy. Other things can also affect the skin such as too much sunlight, abrasion, chemicals, and more. We can use laser technology to remove the skin layer by layer with absolute precision. As the new skin cells grow during healing, they will give the skin a much tighter and younger-looking appearance. This can be really effective for those wrinkles on the forehead, around the eyes, and the mouth. We can also use ablative CO2 laser resurfacing which can get rid of scars, deep wrinkles, and warts.

If you are suffering from any skin conditions such as the above and feel that laser skincare in Foster City may be for you, please make an appointment to see our Dr. Miguel Canales for an assessment, when he can also answer all your questions. The consult is entirely free of charge.

Did You Know This? Adults Can Suffer From Acne as Well as Teens

Here’s something that you probably didn’t know. Adults can suffer from acne as well as teens. Most of us believe... read more

As We Age, Over-the-counter Skin Products May Not Be Enough. You Need a Skin Care Clinic

People who live in the Bay Area are people who feel the need to look their best at all times,... read more

San Mateo is not a cheap city in which to live. Quite the opposite in fact. San Mateo County is... read more

If You Are Looking for the Younger “You”, Laser Skin Therapy Is Good

As we get older, one of the unfortunate things that happens is that we begin to look older. Now some... read more

Juvederm® Is a Well-Known Skincare Brand and Often Requested

Juvederm® is one of the most visible brands in the skincare industry and it is not uncommon for patients to... read more

It is a fact of life that as we age our skin is going to become looser and form wrinkles.... read more

Everyone Knows of Botox, but There Are Several Alternatives

Botox is one of the most visible brands on the planet. Many "average" people know about Botox. It's an incredible... read more

As we get older, wrinkles and lines can form on the skin of the face. We may also suffer from... read more